Director of the San Agustín Nucleus 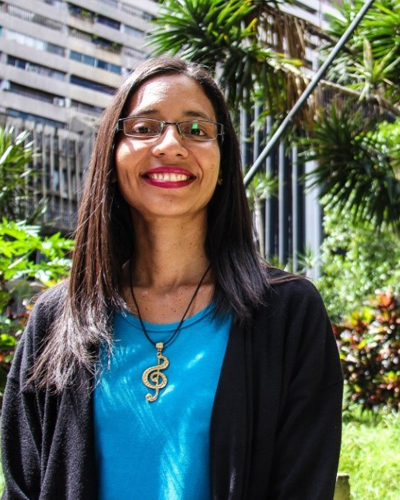 His musical studies began at the Núcleo Lara, belonging to the National System of Orchestras and Youth and Children’s Choirs of Venezuela, where he studied Violin, Musical Language, Choral Practice and Orchestral Practice. In Caracas, she obtained a Bachelor of Music, mention in Musical Education, at the University Institute of Musical Studies (Iudem-Unearte).

Her academic training continued with a postgraduate degree at the Center for Research and Study of Social Dynamics (Ciedis), obtaining the title of Specialist in Group Dynamics, mentioning Psychosocial Intervention; Diploma in Human Technology for Trainers (Pedagogical J.M. Siso Martínez) and Diploma in Integral Management (Latin American School of Management-Elag). His musical appetite has led her to participate in various courses and workshops on Orchestral Conducting, Musical Pedagogy, Body Expression, Neuroscience and Emotional Intelligence, among others, to complement his training as a musician and teacher.

He was a speaker at the Fundación Cisneros Seminar, in its series of talks: Ways of learning and Symposium of women directors, in its third edition in the Venezuela panel; He was part of the teaching team invited to participate in the framework of the exchange agreement between trainers and students of the University of Gothenburg and the first edition of El Sistema Academy in Stockholm, organized by El Sistema Sweden.

Her career has elapsed since 1992, as: Performer, teacher of Violin, Musical Language and director of children’s and youth orchestras in the nuclei of El Sistema, Auditory Training and Musical Language at the National Experimental University of the Arts (Iudem-Unearte ).

Currently, she is director of the San Agustín Nucleus and professor of the Academic Training Program for young people, teachers and directors of El Sistema.