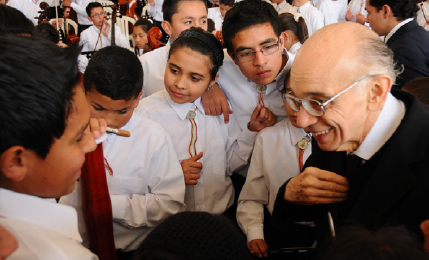 Since 1975, in a rehearsal room with few musicians, what is today the project of social inclusion through music was born: The National System of Orchestras and Youth and Children’s Choirs of Venezuela; whose philosophy and methodology was the product of the tireless work and incalculable vision of one of the most illustrious Venezuelans: Master José Antonio Abreu.

Currently, the world has seen the dream of Maestro Abreu materialize, inspiring more than 70 countries to emulate the model of inclusion through the collective practice of music, giving rise to thinking about what the Maestro himself called a World System of Orchestras and Choirs with main headquarters in Venezuela.
These inspiration models are driven by the ideology and principles of the Master, thus forming application spaces for music education, based on the teaching methodology of El Sistema, seeking to achieve, within its own nature, the flagship social and artistic result of El Sistema at the national and international level.

The internationalization of El Sistema, as a collective and individual academic training model that promotes social inclusion, without neglecting its principles, values, and academic-musical teaching method, but being able to adapt perfectly to the social and cultural realities of other nations, is the commitment you have.

For this, cooperation, exchange and strategic alliances with national and international private and / or public actors are promoted, in academic matters with a social and artistic scope, standardizing and optimizing processes of reactivation and promotion of the interaction between the System and the models inspired by the exterior, in order to structure the operation of El Sistema en el Mundo.
The commemoration of the 46th anniversary of El Sistema is conducive to celebrating the leadership of Maestro Abreu who, despite his heartfelt physical departure, has allowed the continuation and growth of this noble project at the national and international level.

Musician, composer, conductor, cultural manager, public servant and teacher of several generations of Venezuelan musicians. He began his music studies at the age of 9, in the city of Barquisimeto, Lara state.

His entrepreneurial spirit led him to conceive a challenge: in 1975 he founded the National Youth Orchestra of Venezuela Juan José Landaeta, the parent company of the now successful and world-renowned Simón Bolívar Symphony Orchestra of Venezuela, conducted by maestro Gustavo Dudamel. That year of 1975, he assumed the most dazzling task and challenge of his life: to launch a complex, ingenious project, a musical and social network of nationalist rank and worldwide projection, known as the National System of Youth Orchestras and Choirs and Children of Venezuela.