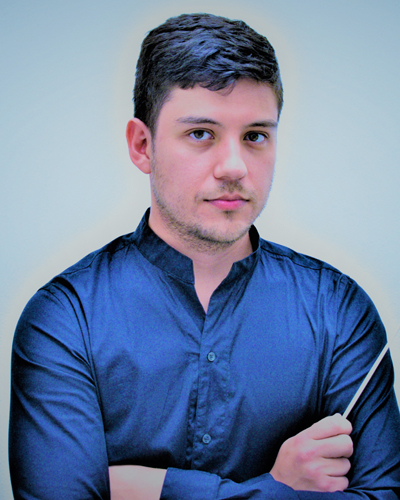 Thanks to his demanding training as an orchestra conductor, his early experience on the podium and his social commitment, Santiago Ossa Alzate was chosen, at the age of 23, as artistic director and conductor of El Sistema Cyprus, a social and musical program that is revolutionizing the Cypriot island, inspired by the National System of Orchestras and Youth and Children’s Choirs of Venezuela.
The Colombian press highlighted his participation in 2014, in the National Direction Workshop of the Caldas Symphony Orchestra, directing the orchestra at the age of 19. The Colombian Ministry of Culture elected Santiago Ossa Alzate, in 2015, as the country’s representative for the Iberorquestas Orchestral Directing Workshop in Montevideo-Uruguay, with the SODRE orchestra.
In 2016, he was the winner of the First Conducting Contest of the Antioquia Symphony Orchestra, being assistant director of this institution, under the mentorship of director Andrés Felipe Jaime. In 2019, he volunteered at Fundación Acción por la Música, Spain, and in 2020 he participated in the Online Conducting Seminar, dictated by maestro Baldur Brönnimann.
He has developed his career in musical projects in Colombia, Peru, Uruguay, Venezuela, Spain and Cyprus and has had a master class with Atso Almila, Alejandro Posada, Ruben Cova, Claudio Vendelli, Nick Palmer, Orhan Salliel, among others. He is a student of the Chair of Orchestral Conducting of Maestra Cecilia Espinosa (the first female orchestra conductor in Colombia), at the EAFIT University. He initiated his training in the Network of Music Schools of Medellín-Amadeus Foundation.