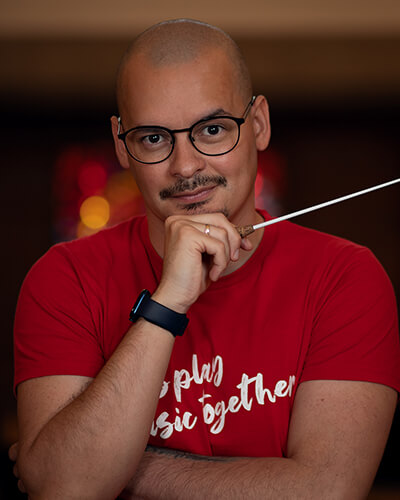 The Royal Swedish Academy of Music awards Ron Davis Alvarez with the 2020 Pedagogy Prize for his “unique musical pedagogical competence”. Selected in 2017, as one of the world’s 50 best teachers by the Varkey Foundation, as part of the Global Teacher Prize, known as the global Prize for teaching, Venezuelan Ron is specialized in training teachers for children and youth orchestras. He has lectured conferences, master classes and workshops with an emphasis on social change through music with teachers from Venezuela, Colombia, Ecuador, Chile, Mexico, United States, Greenland, United Kingdom, Denmark, Italy, Germany, France, Brussels, Croatia, Sweden, Finland, Cyprus, Turkey, Jordan, Kenya, South Korea, China and Greece.

In 2016, Ron Davis Alvarez created in Gothenburg, Sweden, Dream Orchestra with children and teens aged refugees from Syria, Afghanistan, Iraq, Iran, Palestine, Kurdistan, Albania, Angola, Eritrea and Somalia. This group is distinguished because its musicians have never played an instrument before. This project won the Okende refugees world prize in 2021 and now is a role model of education for many music programs around the world.

In September 2019, he shared the podium with maestro Gustavo Dudamel, conducting the Gothenburg Symphony Orchestra in celebration of World Children’s Foundation’s 20th anniversary, which was attended by King Carl XVI Gustaf and Queen Silvia of Sweden

Product of the renowned Venezuelan musical and social program, known as El Sistema, Alvarez was formed in Venezuela as a violinist, orchestra conductor, teacher and cultural manager. He founded in 2011 an orchestra located 700 kilometers away from the Arctic Circle at the Uummannaq Children’s House, in Greenland, run by Ann Andreasen.

He supported as a mentor student from Pendo Amani organization, in Kenya; he also supported Palestinian program.

He is one of the tutors of education at the Multimedia management music program led by Szczecin Philharmonic Hall in partnership with TRAFO Center for Contemporary Art (Poland) and Fjord Cadenza Festival (Norway).