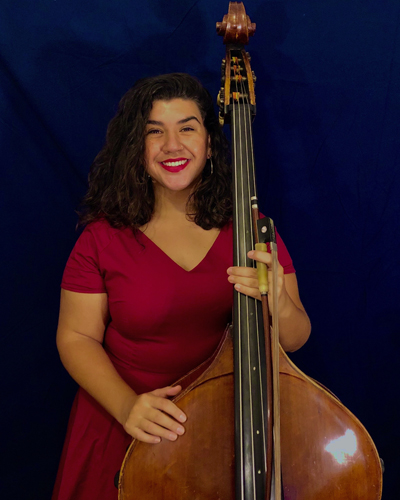 Is a freelance bassist a music educator based in Los Angeles, CA. In addition to frequently performing with local orchestras such as the American Youth Symphony and the Debut Chamber Orchestra, she regularly collaborates with R&B, Soul, and Hip-Hop songwriters and producers in studio recording and songwriting projects throughout Los Angeles.

She is a graduate from Oberlin College and Conservatory, where she earned a Bachelor of Music in Classical Double Bass Performance and a Bachelor of Arts in Neuroscience, and she is currently pursuing a Masters of Music in Double Bass Performance at UCLA. She has worked with musicians from critically acclaimed ensembles such as the Cleveland Orchestra, Los Angeles Philharmonic, New York Philharmonic, Los Angeles Opera, and Vienna Philharmonic.

In addition to her performance pursuits, she is interested in the beneficial effects of music, and has contributed to several publications of neuroscience research focused on the potential of music to serve as an alternative treatment of various attentional disorders.

Olivia has spent the last several years as a music educator and an advocate for access to music in diverse communities. Notably, she works as a Teaching Artist and Education Administrator the Los Angeles Philharmonic’s Youth Orchestra of Los Angeles program.