Musical Director of the Orquestra Geração 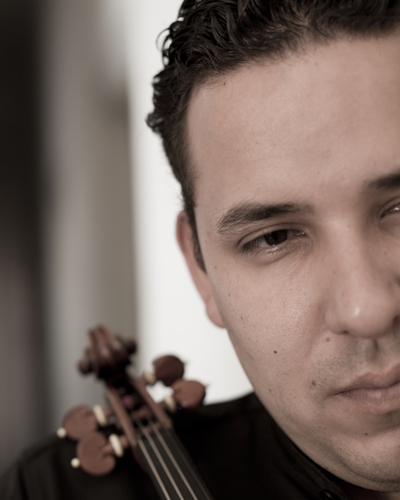 Juan Carlos Maggiorani is a Venezuelan violinist and musical director of the Orquestra Geração. He has been part of the project since 2007, where he teaches Violin, Workshop and Orchestra classes. He won the First Prize for Chamber Music in the RDP Young Musicians Prize competition in Lisbon, the First Prize for Chamber Music in the VI Rotary Club Chamber Music Competition of Santander (Spain) and the special prize for the best interpretation of a work of Mozart. He was considered the best string quartet of the Reina Sofía School, with the diploma awarded by the Queen Sofía of Spain.
He is a founding member of the Matosinhos String Quartet, resident quartet in the Mayor’s Office of Matosinhos, since 2007. This quartet was selected by the European Concert Hall Organization as Rising Stars in 2014-2015, it has performed throughout the Portuguese scene and some of the most important halls in Europe.
He began his musical education at the Emil Friedman School, then continued at the Simón Bolívar Conservatory, at the Latin American Violin Academy and his orchestral training at the Caracas Youth Symphony Orchestra, at the Núcleo de La Rinconada. He traveled to Europe and in 2004 he completed his higher studies in music at the Higher National Academy of Orchestra in Lisbon, that same year he entered the Reina Sofía School of Music in Madrid and in 2006, at the International Institute of Chamber Music, with a scholarship from the Carolina y Albéniz Foundation.
In 2012, he completed a master’s degree in Performance and Pedagogy at the Higher School of Music in Lisbon and in 2016 he obtained the title of Violin Specialist from the Polytechnic Institute of Castelo Branco.
As an educator and director he has collaborated in the Xiquitsi Project (Mozambique), SUPERAR Suisse at the Lucerna Festival, Great Britain National Children’s Orchestra, Joven Figueres Orchesta (Catalonia), Acción Social por la Música (Madrid), Dalanota (Madrid), Sistema England (United Kingdom), El Sistema Sweden (Gothenburg), El Sistema Ópera Mediterranée (Nice), Sistema Cyprus, Sinfonía por el Perú (Salzburg), Festival Ilumina (Austria) and in the summer camps of the Sistema Europe Youth Orchestra (SEYO ) in Vienna, Istanbul, Milan, Greece, Birmingham and London.
Participated in concerts and open rehearsals with the directors: Gustavo Dudamel, Maestro José Antonio Abreu, Plácido Domingo, Joyce DiDonato, Daniel Barenboim, Mr. Colín Davis, David Afkham, Peter Csaba, Ricardo Chailly, Jesús López Cobo, Lorenzo Viotti, Helen Cha -Pyo, Pedro Neves, Jean Marc Burfin, Ulyses Ascanio, Christian Vásquez, Dietrich Paredes.
From 2016 to 2021 he has been a member of the Board of Directors of the Europa System.