Manager of the Musical Initiation Program at El Sistema 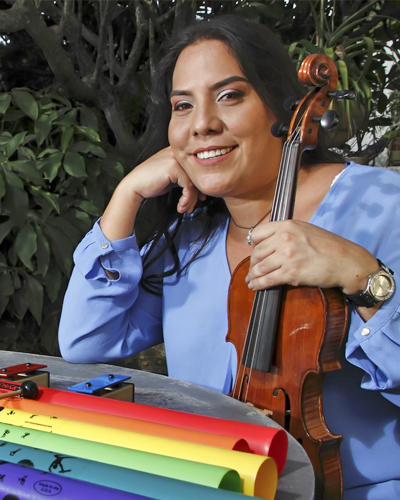 Teacher, author and director of children’s orchestras. She has created what critics call “the basis for leading children’s and youth orchestras to be counted in a few years” in various musical schools around the world. The Paper Orchestra, the novel orchestral initiation teaching method that he designed in 2005, is aimed at the stimulation of children between 2 and 6 years old through collective musical practice, orchestral discipline and the psychomotor development necessary to play an instrument and get closer to the different sounds and timbres of each one.
She has personally trained teachers from Venezuela, Ecuador, Panama, Puerto Rico, Chile, Portugal, Italy, Cyprus, Germany, Sweden, Finland and Denmark on her orchestral initiation method. For specialists in children’s music education, this modality is today an internationally recognized experience and has been replicated in several countries around the world.
She trained in El Sistema herself, she as a violinist at age 8 and she studied at the Simón Bolívar Conservatory of Music. She served as director of the Orchestral Initiation Program at Núcleo La Rinconada, where she created the Orquesta de Papel. She is a teacher of arts, music mention, graduated from the Instituto de Pedagogía de Caracas.
She has taken numerous courses, workshops and teacher training diplomas such as Dalcroze rhythm, Orff Methodology, Kodaly Method, Martenot and music therapy for preschool. She has a diploma in Child, Educational and Reeducational Psychomotor skills from the MonteÁvila University (Venezuela) and an international diploma in Music and Movement from the University of Carabobo Foundation (Venezuela). She is also a member and trainer of the Venezuelan Association of Infant Massage and School Massage.
She is a certified Positive Discipline Educator by the Positive Discipline Association. In 2017 and 2018 she leads the Orchestral Initiation course within the international teacher training seminar El Sistema Academy that has been held in Stockholm, Sweden. She participates in the Music Pedagogy Congress held at the University of Bamber, Germany. She is part of the Take a Stand Symposium held by the Los Angeles Philharmonic in conjunction with the Longy School of Music of Bard College, as part of The Project Mahler.
She has advised the programs implemented by the Orquesta de Papel in Chile, with the Orquesta para todos and the Fundación de Orquestas Juveniles e Infantiles de Chile; in Puerto Rico, with the System Orchestras and Youth and Children’s Choirs 100×35; in Portugal, with the Associação das Orquestras Sinfónicas Juvenis Sistema Portugal; in Sweden, with El Sistema Sweden; in Ecuador, with the Children’s and Youth Orchestras; and in Panama, with Orquesta para todos and the National Institute of Culture (INAC), where she directed a concert at the Anita Villalaz Theater.
In addition, she has been part of the orchestral training workshop missions of the Music for Growth program of the Development Bank of Latin America. For 20 years she is part of the line of violins of the Gran Mariscal de Ayacucho Symphony Orchestra, in Venezuela, under the direction of the teachers Rodolfo Saglimbeni and Rafael Jiménez. She has participated in more than 15 recordings of different genres.
At the moment, she is studying for a master’s degree in education with a mention in Management at the Bicentennial University of Aragua, in Venezuela. Currently, she is manager of the Musical Initiation Program and teacher of the Academic Training Program for young musicians, conductors and composers of El Sistema.