Musical Director of the Nashville Symphony and the NFM Wrocław Philharmonic 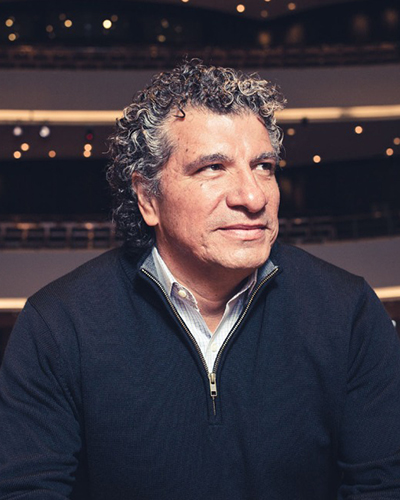 Giancarlo Guerrero is a six GRAMMY® Award-winning conductor, musical director of the Nashville Symphony and NFM Wrocław Philharmonic, and principal guest conductor of the Lisbon Gulbenkian Orchestra. Guerrero has been praised for his “charismatic direction and attention to detail” (Seattle Times) in “viscerally powerful performances” (Boston Globe) that are “at once vigorous, passionate and nuanced” (BachTrack).

Through commissions, recordings, and world premieres, Guerrero has championed the works of prominent American composers, presenting 11 world premieres and 15 recordings of American music with the Nashville Symphony, including works by Michael Daugherty, Terry Riley, and Jonathan Leshnoff.

As part of his commitment to fostering contemporary music, Guerrero, along with composer Aaron Jay Kernis, guided the creation of Nashville Symphony’s biannual Composer Lab & Workshop for young and emerging composers.

In the summer of 2020, although live concerts were largely canceled due to the coronavirus pandemic, Naxos released three new recordings of Guerrero and the Nashville Symphony’s repertoire “performed with horsepower and passion” (Gramophone) by Aaron Jay Kernis, “Solid Performances”.

(New Yorker) from the music of Christopher Rouse, and Opera Without Words by Tobias Picker. “It goes without saying,” Texture writes, “that all 3 are in the best of hands when their works are performed by Guerrero and the Nashville Symphony.”

Guerrero’s 2019/20 season included a tour of 13 North American cities with the Wrocław Philharmonic and return engagements with the Boston Symphony and the Bilbao Symphony Orchestra. Spring 2020 would also have included engagements with the Deutsches Symphonie-Orchester Berlin, the Bamberg Symphony, the Frankfurt Opera and Museums Orchestra and the New Zealand Symphony. While Fall 2020 engagements in North and South America, including the Nashville Symphony season, his debut with the San Francisco Symphony, and appearances with the Boston Symphony and the Orquestra Sinfônica do Estado de São Paulo, were canceled, Guerrero performed in a concert broadcast live with the Houston Symphony in August 2020. In fall 2020 and spring 2021, he returned to Europe to perform Beethoven with the Gulbenkian Orchestra and conduct the NFM Wroclaw Philharmonic at 8 different programs, including a recording session with the orchestra and violinist Bomsori Kim.

Guerrero, born in Nicaragua, migrated during his childhood to Costa Rica, where he joined the local youth symphony. He studied Percussion and Conducting at Baylor University in Texas and earned his Master’s in Conducting from Northwestern. Given his beginnings in youth civic orchestras, Guerrero is particularly committed to conducting training orchestras and has worked with the Curtis School of Music, the Colburn School in Los Angeles, the National Youth Orchestra (NYO2), and the Yale Philharmonic, as well. as with Accelerando of the Nashville Symphony, a program that provides an intensive music education to promising young students of diverse ethnic backgrounds.