Is a vocalist from Athens, Greece, based in NYC 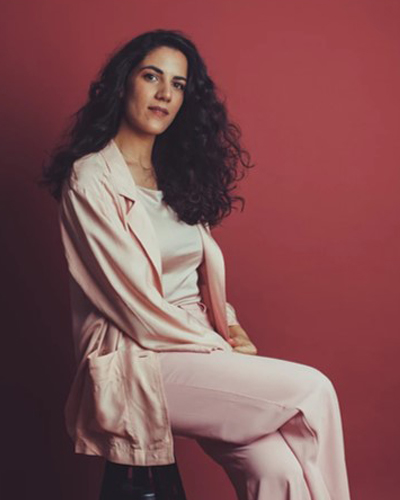 is a vocalist from Athens, Greece, based in NYC. Though she began as an art history student she graduated in Drama and Dance at Tufts University. She then decided to focus on music and graduated from Berklee College of Music in Boston.

Eleni has collaborated with artists from different countries in styles spanning from south american folklore, jazz, soul, greek traditional music and vocal improvisation. Some recent features include Grammy nominated album Ona with Thana Alexa and Sony Music Mexico’s album Amor Pasado with Leonel Garcia. Eleni has performed in Carnegie Hall, Lincoln Center, Park Avenue Armory, Aganis Arena, at the Latin Grammys with Alejandro Sanz, as well as in festivals in Europe, South America and the US.

Teaching her practice BodySong at Bobby McFerrin’s Circlesongs Program at Omega Institute helps shed light on the importance of imagination with the voice.

Eleni is also a Carnegie Hall Teaching Artist composing music with families across all boroughs of New York and abroad, a Music Mentor at Stuttering Association for the Young and holds music therapy sessions with children with autism. Music has been a guiding force in Eleni’s life and through it wishes to bring joy, strength and inspiration to others!