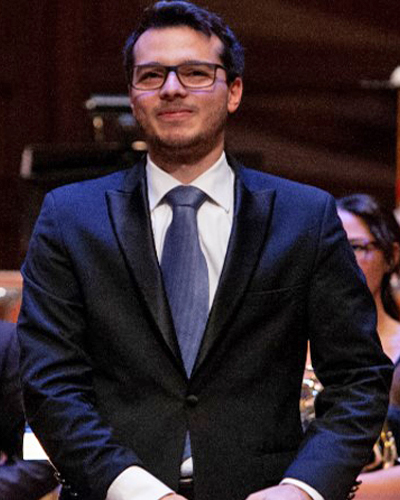 He began his musical training with the piano, at the age of 4. At Emil Friedman College, at the age of 11, he began his trumpet studies. In 2000, after auditioning, he entered the National Children’s Orchestra of Venezuela. In 2004, after competing, he was part of the trumpet line of the Simón Bolívar Symphony Orchestra of Venezuela, with which he has performed under the direction of teachers Claudio Abbado, Sir Simon Rattle and Gustavo Dudamel, among others. In addition, he is a member of the Simón Bolívar Trumpet Ensemble. With these groups he has performed in various cities of Venezuela and has participated in international tours throughout the 5 continents.

He has participated in training courses and seminars with prominent national and international teachers and in groups such as Empire Brass, Canadian Brass and Spanish Brass, etc. In 2008, he began Orchestral Conducting studies with Maestro José Antonio Abreu and also attended conducting seminars with Maestro Eduardo Marturet. He currently receives classes with the teacher Pablo Castellanos.

He has performed as a conductor in important festivals and international tours, with various orchestral groups from El Sistema. He frequently attends as a director, workshop leader and lecturer at events in America and Europe, where he presents and promotes the work and social transformation that is achieved through the collective practice of music. He regularly participates in the concert programming of the professional orchestras and choirs of El Sistema and currently works as a professor at the National School of Trumpet, he is manager of the Academic Orchestral Program and musical academic director of El Sistema.