Conductor of an international career 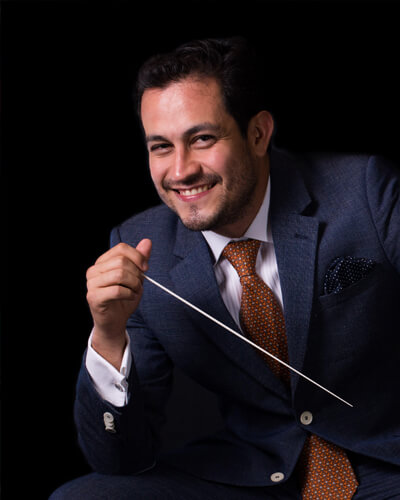 He treasures fruitful spells as principal conductor of the La Fenice Theater in Venice, the Mozart Bologna Orchestra and the Melbourne Symphony Orchestra. His presentations with international media coverage are notable: 2 of La Fenice’s famous New Year’s concerts, broadcast around the world by RAI; the 2016 ECHO Klassik Gala with Konzerthausorchester Berlin and soloists Anna Netrebko, Khatia Buniatishvili, Martin Fröst and Andrea Bocelli, shown live on German television ZDF and The Tokyo Gala Concert which celebrated the 120th Anniversary of Deutsche Grammophon at Suntory Hall, in 2018, with the release of a CD recording, a few weeks later.
He toured Asia with the Saito Kinen Orchestra and conducted at the 2018 and 2019 Matsumoto Festivals. In Japan, he is on-going with the NHK Symphony Orchestra. His European and North American concert works with the Orquesta de Santa Cecilia, Rome; the La Scala Orchestra, Milan; the Mahler Chamber Orchestra, the Paris Chambre Orchestra, the French Radio Philharmonic Orchestra, the National Orchestra of Spain, the BBC and Royal Philharmonic Orchestras, the Los Angeles Philharmonic and the Vancouver Symphony Orchestra.
He conducts a wide symphonic repertoire that ranges from Mozart to Mahler, Shostakovich and Bruckner, through Ginastera, Márquez and Marsalis. He was concertmaster of the Simón Bolívar Symphony Orchestra of Venezuela, his teachers in Orchestral Conducting were: José Antonio Abreu and his mentor, Claudio Abbado. He continues to explore direction with Mark Stringer, in Vienna. In opera, he worked at the Deutsche Oper, the Berlin Staatsoper, the Liceu in Barcelona; the Palau des Arts, Valencia; at the São Carlos Theater, Lisbon; Maggio Musicale Fiorentino, Rossini Festival Pesaro and Teatro Regio di Torino.
In Venezuela, he has been undergoing intense training periods and expands the repertoire of the El Sistema orchestras. In addition, he is the principal conductor of the Simón Bolívar Symphony, with which he debuted with Beethoven’s Ninth Symphony in Colombia, in 2013, and in Mexico, in 2016, at the National Auditorium and in an outdoor concert for more than 3,000 people in Iztapalapa. In 2018, together with the violinist Francesco Senese, he founded MACH, a project that is part of the Musica sull’Acqua International Summer Festival, in Colico, Italy, so that students from all over the world can receive free tuition.