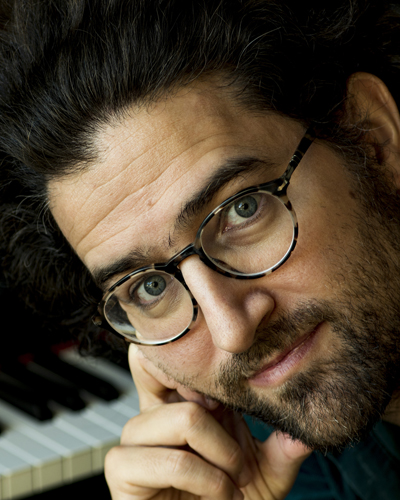 He comes from a very musical family and begins his encounter with music from his gestation. At age 18 he is selected to represent Spain in the European Jazz Youth Orchestra (EJYO). In 1998 he recorded his first album Des D’aquí as co-leader with Catalan bassist David Mengual. This production was voted the best Spanish jazz album of the year by Spanish jazz critics (Cuadernos de Jazz).

A year later, he received the SGAE Award for Jazz Breakthrough Artist and another Breakthrough Artist Award from Turia magazine. He won a full scholarship at the prestigious Berklee College of Music in 2000, where he played with Robert Stillman, Chris Van Voorst, Kendrick Scott, (eventually forming the band Kalifactors and recording his CD Kalifactors, released on the Fresh Sound label. ) and also with David Doruzka, Jason Palmer, Walter Smith, Lage Lund, Lionel Loueke, Javier Vercher or Ferenc Nemeth, among others.

In 2004, the IVM of Valencia commissioned the musician to record an album and compose all the material with the subsequent edition of El fabulador, by Albert Sanz and the eleven fingers, where the colorful instrumentation consisted of 8 wind instruments, in addition to the section of rhythm. This record material was voted one of the best Spanish jazz albums of the last decade by critics in Spain (Cuadernos de Jazz).

Already in Spain, he assumed the position of Jazz teacher at the Musikene Superior Conservatory of the Basque Country and later in the Jazz Department at the Valencia Superior Conservatory. During those years he combined teaching with concerts and released a live album (Metamorphosis) with his trio at the time (with Masa Kamaguchi and RJ Miller) for Fresh Sound Records.

He also collaborated in the bands and in the recordings of the Flamenco Big Band of Perico Sambeat, the trio and quintet of Jorge Rossy (here as hammond organist), Jordi Matas and Carme Canela (also as organist), and the famous project Silvia Pérez Cruz and Javier Colina, the trio that gave rise to the album En la Imaginacion, among others.

As a musical producer and arranger, he recorded the album by Mamen García (El Cofrecito) in which musicians such as Jorge Rossy, Javier Colina or Antonio Serrano collaborated. In 2011 he produced the album Oh what will be, in New York, with a stellar trio made up of the great drummer Al Foster (Miles Davis) and the double bass player Javier Colina (Bebo Valdés). Engraved by the great James Farber.

In 2012 he had the opportunity to travel with this great trio playing at the main festivals in Spain and also recording the album / bootleg For Regulars Only live at the Café Central in Madrid. As a composer for theater, Albert Sanz has collaborated with the award-winning and special company Bambalina Teatre Practicable, creating the music for the shows Ulises, Cosmos, the musical El Geperut de Notre Dame and Petit Pierre.

In 2014, his last major collaborations are mostly duets, the album Mahalo, with the virtuoso harmonica player Antonio Serrano (Paco de Lucía) and Dolphin´s Blues, vinyl recorded live with the young trumpet genius Félix Rossy. Currently Albert Sanz focuses more than ever on songwriting and his next project includes a trio record with the fantastic Larry Grenadier, on double bass, and Jorge Rossy, on drums and vibraphone, while teaching at the prestigious Berklee College. of Music in Valencia.